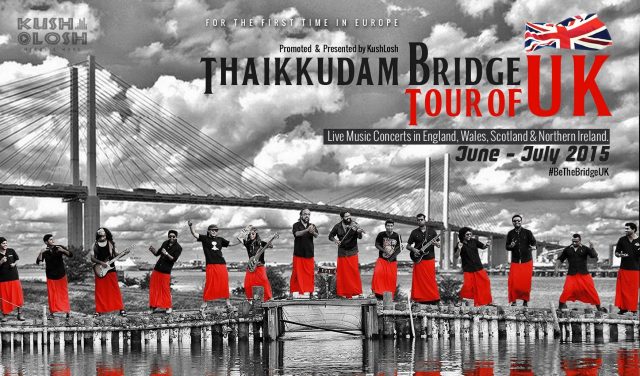 Thaikkudam Bridge is an Indian music band, founded by Kerala based cousins Govind Menon and Siddarth Menon. The band became very famous through the musical show Music Mojo and their own composition fish rock, shiva, chathe which became popular and viral through social media networking sites and YouTube. Since its birth in Sept 2013 in a Kappa TV show featuring independent music, the multi-lingual and multi-genre band has grown to immense popularity. With a Face book community following of 552k and YouTube videos crossing 2.7m views, it is today arguably the most followed band in the history of independent music in South India.

After hosting many successful shows in South India & Middle East Countries and forth coming tour of Australia & New Zealand, KUSHLOSH promotes and presents Thaikkudam Bridge, a 18-member ensemble from Kerala for the first time in UK and rest of Europe that renders popular Malayalam, Tamil, Hindi & English tunes in their own unique style. They catapulted to success following the response of their smash hit ”Fish Rock” which garnered over half a million hits on YouTube within the first month.
The band has done an average of one show every three days since its inception, playing everywhere from school and college gigs to corporate and private shows. Now, Thaikkudam Bridge is ready to embark on its first tour of Europe starting with UK and then to rest Europe during June – July 2015.

The band performs across all genres and languages, with melody being a forte. The band has also specialist singers and performers with an unconventional band name and an unconventional number of vocalists & performers, Thaikkudam Bridge is a force to reckon within the Musical World. Though Kerala-based, the band has performers from across different parts of India, thereby creating an eclectic flavour representing a class act. With ground-breaking performances and nostalgic re-creational abilities, Thaikkudam Bridge is a Firebrand Musical Band. Very well known for creating a mesmerizing enthusiasm around the audience with power-packed rock performances, Thaikkudam Bridge is a refreshingly enigmatic band.

As the band’s pioneer Govind Menon puts it, Thaikkudam Bridge was born out of a genre less or multi-genre dream to create memorable music. The band consists of 18 friends from different professional backgrounds and from different parts of the country. What unites them is their undying passion for music. Thaikkudam Bridge belongs to India’s diversity, which is perhaps why their music is rooted everywhere.

Govind Menon is a composer, singer, and violinist in Malayalam and Tamil films industry. He is captain of the ship and one of the founders of the Malayalam musical band, Thaikkudam Bridge.

He works with famous music directors in Malayalam and Tamil. He was the Title winner of ‘Super talent’ a reality show in Amrita Television and have received various certificates for Western Violin competitions.
Skills : Vocal, Violin, Music Producer

Siddharth Menon is a playback singer from Mumbai, India. Siddharth Menon has rendered some film songs but he is popular for his band Thaikkudam Bridge and he is the Co-founder of the band.

He is graduated from University of Mumbai where he received a degree in Bachelor of Commerce. After graduation he decided to study western classical music and joined A.R Rahman’s music college – KM Music Conservatory in Chennai .
Siddharth Menon had performed in the Sony TV reality show,  X Factor India and his group “Nirmitee” was the finalist of the show. The other members in the group were Vian Fernandez, Pranil More and Ranjana Raja.
Skills : Vocals

Peethambaran Menon is the father Govind Menon, he is a passionate singer and he hails from a musical family in Irinjalakuda, Kerala.

Peethambaran’s elder brother Gopinathan was a Carnatic musician and his early exposure to music has been through his brother. “There were very few opportunities during my time. Now, there are so many options. Social media offers a wonderful platform for young people.”

After his retirement from the Irrigation Department two years ago, Peethambaran has been part of the band, contributing in his own full-toned signature style, jamming with a bunch of young musicians. After a 30-year break from singing and now this 58-year-old is the band’s unique attraction with his popular number ‘Chathe’.
Skills : Vocals

Vipin is a trained classical vocalist; he is a part of band. He is famous for his song performances like ‘Allimarkaavil pooram Kaanan’, Neeraduvaan nilayil neeraduvaan.
He is known as ‘Kuttettan’ in the band. He sings Malayalam and Tamil melody songs. He holds a Bachelor’s of Science Degree in Mathematics from the University of Calicut.
Skills : Vocals

Christin Jose is a vocalist in Thaikkudam Bridge the way he sings the ‘Ilayaraja’s’ melody touches everyone’s heart. He sings Malayalam and Tamil melodies . He is famous as ‘Minnaram boy’, by singing the song. He is from Karukachal in Kottayam district.
Skills : Vocals

Anish is a vocalist in Thaikkudam Bridge. He is man with full of energy, when he performs the ‘Chakkele’ makes different atmosphere, he is known as ‘Chakkele’. He sings Malayalam & English songs.
Skills : Vocals

Krishna Bongane , vocalist from the India’s favourite “Thaikkudam Bridge” he is a Hindustani singer he was a student of the famous singer and musician “Ustaad Raashid Khan”, and Krishna plays Sur Mandal (Musical Instrument).

His view is that ‘Melody’ is what lives within a song or music composition that makes it immortal. He is playback singer, he sung song ‘Bna Har Dil Ki’ in Vicramadityan 2014. He sings in Hindi album songs as well ‘Yaad Piya Ke Aayi’ from the album Rangoli. He comes from Aurangabad, Maharashtra.
He holds a Masters of Music in Hindustani Classical Vocal Music from the University of Mumbai. He is also a qualified lecturer certified by the University Grants Commission (UGC).
Skills : Vocals

Nila Madhav Mohapatra is a vocalist in Thaikkudam Bridge. He comes from Bhubaneswar, Orissa in India. He holds a Masters of Music in Hindustani Classical Vocal Music from the University of Mumbai.
He was also been awarded 2 year Scholarship in 2007 in the field of Hindustani (Vocal Classical Music) by the Ministry of Culture, Govt of India. He has great depth and feel in his singing. The combination songs of Nila with Krishna Bongane are Magical.
Skills : Vocals

Mithun Raju is the lead guitarist and the soul of Thaikkudam Band. When he performs people compare him with Eric Clapton and Bryan Adams. He looks very simple and he has got magic in his fingers.
He is a recording artist and playing for many music directors in the film industry. He is from Kochi in Kerala. He has got many certificates in Western String Instrument competitions held at State levels.
Skills : lead Guitar

Ashok Nelson is the Rhythm guitarist in the band; He is a stylish guitarist and he play with passion and attitude. He comes from Thiruvananthapuram , Kerala, India.

He is an Advocate, he holds an LLB degree from University of Kerala. He do Jingles, work as a freelance composer, music director and he has worked for famous music directors in India.
Skills : Rhythm Guitar

Vian Fernandez is the Base guitarist and vocalist in the band, he is famous for his rapping. He comes from Goa, India. He was a part of ‘X factor India’ 2011 where he had performed with Siddharth Menon.
He is trendy and freaky. He has done Bachelor of Commerce Degree from the University of Mumbai and has also worked as Western Vocal Teacher for Keramb Sangeet Kala Academy, Mumbai.
Skills : BASS GUITARS, VOCALS

Ruthin Thej is the key player, the Keyboardist of Thaikkudam Bridge. He is the youngest member in the Band, his father is a famous Malayalam music director Thej.
He is from Calicut, Kerala and he studied in University of Madras, Chennai. He is so charming and Trendy. He holds Trinity Guildhall Award in Piano with Merit from Trinity College London.
Skills : KEYBOARDS

Anish Thankamony Nediathuruthil is really the beat of the band, He is the Drummer and he gives the beats and people used to jump in the air for the beats. He is a graduate from Mahatma Gandhi University in Bachelor of Arts (B.A.) specialised in ‘Mridangam’ in 2007 and he has passed in grade exams in Drums till 8th Grade. He holds Trinity Guildhall Award in Drum Kit with Merit from Trinity College London.
He has won various competitions held at University levels in the category of Western Percussion Instruments. He has started his career as a drums teacher at the age of 16. He is based in Kadavanthra, Kochi and he is also giving online drumming classes. He prepared students for grade exams in Drums. He says “I have been taking classes in Schools and Institutions for all levels of students and prepared them to appear in all levels of competitions.”
Skills : Drums

Rajan K Somanath is a young, promising Sound engineer of Thaikkudam Bridge. He brings perfections to the Music tones.
He holds a diploma certificate in Audio Engineering from SAE Institute. He is a graduate from University of Kerala with BA Degree in Mass Communication and Video Production.
Skills : SOUND ENGINEER

Amith Bal is a sound engineer of Thaikkudam Bridge and people like him. This is the comment of one of his fan. ‘Have to say, your sound engineering is bloody brilliant. you are the heart of this band. Keep up the good work mate, god bless.’ He is a diploma certificate holder in Sound Engineering with A Grade.
Skills : SOUND ENGINEER

Hemanth Kulamullathil is a passionate Sound engineer of Thaikkudam Bridge. He delivers the music more promising. He holds a diploma certificate in Audio Engineering from SAE Institute.
Skills : SOUND ENGINEER