Adam Joan Pothen(Prithviraj) is a young handsome affluent planter who lives in Kerala. His younger brother Alan (Rahul Madhav) along with his wife Shwetha(Bhavana) and mother is settled in Scotland.

Adam accidentally meets a beautiful half jewish girl named Aimy( Mishti) during a wedding function, fell in love and eventually got married. The newly married couple flew to Scotland,to spend their honeymoon.

After few months of happiness,at very early stages of their married life, Aimy gets pregnant….. Adam was not prepared to accept it initially, but agrees to the wishes of his mother, wife and brother… Aimy gives birth to a baby girl, dies at the hospital due to pregnancy complications….. Adam believed that the new child (Ila) is the reason for his wife’s death and decide to leave Scotland without the baby…. This compels Alan and Swetha,(who were childless even after five years of their married life), to adopt little Ila.

After few years, a tragedy happens in their family…. An unknown gang kills Alan’s /Adam’s Mother and kidnaps Ila.. Adam comes back to Scotland, gets into the process of rescuing his daughter, with the help of his friend Syriac (Narein).

The positives Of Adam Joan

1.Debutant director Jinu.V.Abraham needs a pat on his back for conceiving this thriller movie in a stylish ,gripping manner…. His shot selection, clever use of the locations, the perfection shown in the romantic and action sequences,skillful blending of the BGM… the bike chases etc proves that he is definitely going to be a promising addition to the list of blockbuster directors in Malayalam film industry…. It’s one of the rare Malayalam movies that effectively utilises the colour “Black ”

“Brilliantly Excellent” is the only word that can be used to describe the magical cinematography work of Jithu Damodar… The picturesque locations of Scotland is beautifully captured by Jithu…. The panoramic shots, the chases ,the dark and the grey sequences, the stunts all looks stunning in Jithu’s magical frames…… Adam Joan is one of the best cinematographical work we have seen in Malayalam during recent times..

Deepak Dev’s music is refreshing and aptly suits the mood of the movie…. But its the BGM that is another high light of Adam Joan… The BGM is haunting, gripping and elevates most of the thriller sequences to a different level… Superb Work!!!

Adam Joan is also a winner as far as the performances of lead artists is concerned… Prithviraj looks dashing, stylish and gives a convincing performance…..Bhavana maintains a single serious expression through out the movie,but she looks perfect for that role… Rahul madhav as Alan and Lena as Bhavana’s friend Jessy is impressive …..Narein makes a terrific come back to malayalam and he excels in the character Syriac… There are so many foreign artists in the movie and they all did their part effortlessly…

Even when the direction, Camera, Cinematography, music, BGM and the performances are all top notch,still Adam Joan doesn’t gets classified as a perfect movie….. There are several reasons that degrades Adam Joan to an average thriller from a mindblowing thriller ….

1.The movie has got a decent plot for sure.. but the lack of a convincing credible screenplay is the major drawback of Adam Joan.

2.The presence of too many non logical sequences and situations prevents the audience from getting connected to the emotions of the characters.

3.The sudden transformation of Adam Joan from a fun loving planter to that of a daring revenger is not convincing and sometimes slips to just a heroic larger than life character.

4.The paradigm shift of the story from a romantic family subject to a thriller that deals with Judaism, Black magic, Satan Workship etc specially when Prithviraj’s previous movie”Ezra” also dealt with a similar theme, is bit too hard for an ordinary cinefan to digest..

Inspite of the above mentioned negatives the movie is definitely a one time watchable thriller… The positives mentioned in the review specially the cinematography, BGM, picturesque locales of Scotland and terrific performance of the starcast supercides the few negatives… 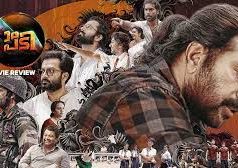 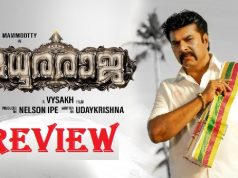 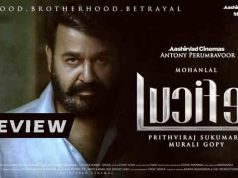