Golmaal Again is a 2017 Indian Hindi comedy horror film of bugdet 80 crores, directed and co-produced by Rohit Shetty, and written by Sajid-Farhad and Yunus Sajawal. 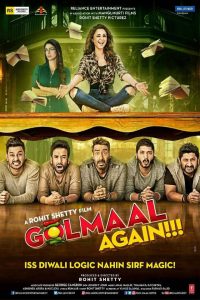 Golmaal Again is the fourth installment of the Golmaal film franchise and marks Devgn’s tenth film collaboration with Rohit Shetty.

The production of the film began in July 2016 and principal photography commenced in March 2017 in Mumbai. The film released on 20 October 2017.

Who Movie | Mangal Suvarnan – Who Are You ft. Dhanusha Gokul | Pearle...

Horro thriller ‘Leeyaans’ posters out | directed by Bijudas and produced by Nisha Nair.