Julie 2 is a Hindi thriller film written, co-produced and directed by Deepak Shivdasani and produced by Vijay Nair.  This is the sequel to Shivdasani’s earlier film Julie (2004).

It features Raai Laxmi in the lead role which marks her debut in Hindi cinema. 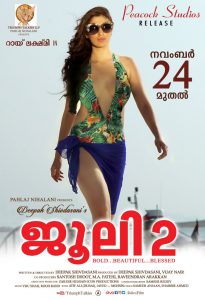 Filming locations include Mumbai, Hyderabad and Dubai. The film’s first look poster was released on 14 February 2016 coinciding with Valentine’s Day.

The film was released on 24 November 2017 in Hindi, Telugu, Tamil & Malayalam languages.