The first look and second look posters were revealed on 23 July 2017 for the occasion of Suriya’s birthday. Though the title suggest about politics as main plot in the movie, director says that this movie is not based on politics and the story is in the backdrops of 1987.

Watch this extremely racy teaser of Thaanaa Serndha Koottam which questions the layers of corruption existing in our society. 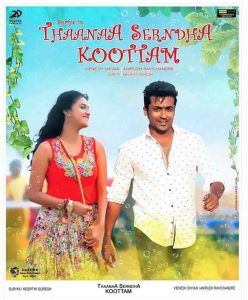 Thaana Serndha Kootam is scheduled to be released in January 2018, during the festival Thai Pongal.