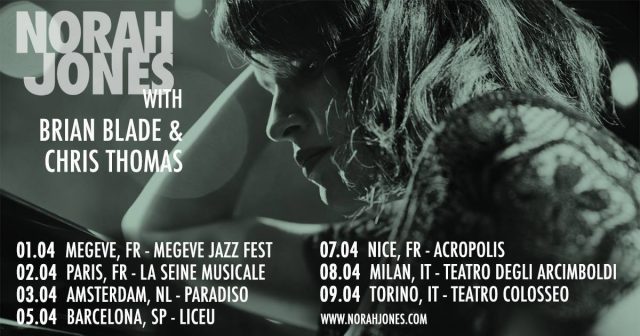 Norah Jones was born [Geetali Norah Shankar] on 30 March 1979,  in the Brooklyn district of New York is a singer, songwriter and actress. but she grew up in Dallas. Her jazz fan mother passed onto her the love of this music. Her father is the Indian musician Ravi Shankar.

She has won numerous awards and has sold more than 50 million records worldwide. Billboard named her the top jazz artist of the 2000–2009 decade.

She has won nine Grammy Awards and was 60th on Billboard magazine’s artists of the 2000–2009 decade chart. With her first three albums, which have already sold over 40 million copies worldwide (Come Away With Me – 2002, Feels Like Home – 2004 et Not Too Late – 2007) and all of which reached the top of the Billboard 200, Norah Jones has forged herself a very strong identity with her sensual voice and her jazzy pop, mainly composed on the piano.

Released on 16 November 2009 on Blue Note, The Fall signalled a new musical direction. This new records mark a break with its predecessors through the vivacity of the melodies, in contrast to her older songs, which were much more understated. Here, Norah Jones reveals her rock’n’roll side, moving away from the jazzy ballads we have become accustomed to.

Norah Jones is currently working on a new album to be released at fall. On The Fall, however, not content with placing the emphasis on rhythm, she was determined to place her guitar-playing at the centre of the action.

Pre-sales for the below performances began on 6th Dec. Tickets go on sale to the public Friday, December 8th at 10AM Local Time.

The concerts will be held at following locations;