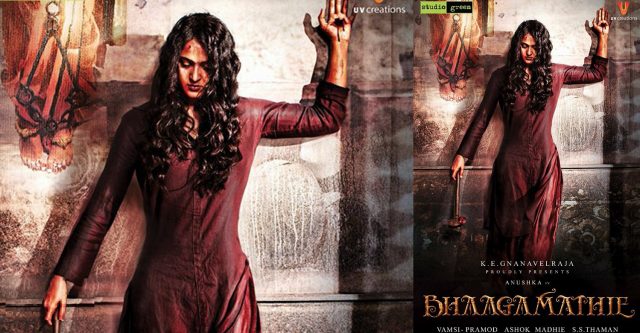 The first look poster of Bhaagamathie was launched on Anushka Shetty’s birthday on November 7. As evident from Bhaagamathie poster, Anushka sports an incredibly intense look.

With a blood stained axe in one hand, and ungroomed hair, the actress sports a look which most of her fans wouldn’t have seen so far.

If reports are to be believed, the actress shed 18 kilos for this role.

Bhaagamathie teaser is expected to be launched on December 20.

Bhaagamathie is an upcoming Indian Telugu,Tamil and Malayalam thriller film written and directed by G. Ashok. This movie is set to release on 26 January 2018.

It features Anushka Shetty in the lead role while Unni Mukundan, Jayaram, and Aadhi Pinisetty in the supporting roles. S.Thaman is scoring music for Anushka’s Movie.

Production house UV Creations, who co-produces the film unveiled the first poster of the film on Twitter with a post that read: “She is coming! Presenting #BhaagamathieFL starring Anushka.”

Actors and friends from the ’80s reunite in Mahabalipuram