Fahadh Faasil is to make debut in Tamil film by playing a lead role in Velaikkaran an action thriller film. Velaikkaran (The Worker) film is written and directed by Mohan Raja.

Featuring an ensemble cast including Sivakarthikeyan and Fahadh Faasil in the lead roles. The film has music composed by Anirudh Ravichander and cinematography by Ramji.

Produced by R. D. Raja. The film is based on an attendant named Arivu and his battle against food adulteration. 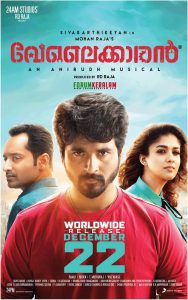 The soundtrack and background music of this film are scored by Anirudh Ravichander who also scored for Siva Karthikeyan’s previous film ‘Remo’ which was also produced by 24 AM studios. Velaikkaran is the 15th film for Anirudh and 6th film along with Sivakarthikeyan.

Movie based on Kalabhavan Mani ‘Chalakkudikkaran Changathi’ directed by Vinayan

Incredible music by Peter Bence on Charlie Puth’s “Attention” with a piano.