Odiyan is an upcoming Malayalam-language Indian fantasy thriller film directed by V. A. Shrikumar Menon in his feature film debut and written by K. Harikrishnan. It is based on the legend of Odiyan, who in Kerala folklore are men possessing shapeshifting ability, who can assume animal form.

Odiyans are said to have inhabited the Malabar region of Kerala during the pre-electricity era. 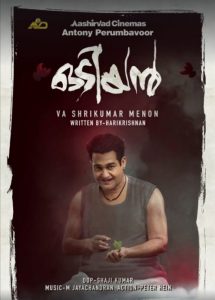 The film stars Mohanlal in the lead role, with Manju Warrier and Prakash Raj; produced by Aashirvad Cinemas.

According to Shrikumar, the film is a magical realism thriller. Production design is done by Sabu Cyril, while Peter Hein will handle the action choreography, art director is Prasanth Madhav, Shaji Kumar is the cinematographer and M. Jayachandran will compose the music.