Adirindi was released in 417 screens across the Telugu states on November 9, three weeks after its original version hit the screens. The Vijay starrer opened to a fantastic response at the box office on the first day. The movie was successful in impressing viewers. 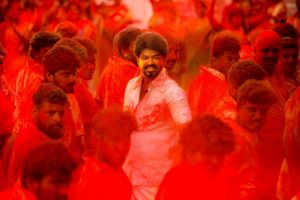 Adirindi, the Telugu version of Vijay’s Mersal, has made a decent collection at the box office in the 8-day extended first week and the distributors in Telangana and Andhra Pradesh have broken even.

Adirindi is estimated to have collected Rs 8.5 crore at the AP, Telangana box office in the first week.

Adirindi, which has been directed by Atlee Kumar of Theri fame, clashed with three other new releases Okkadu Migiladu, C/o Surya and Detective, but the positive word of mouth helped the film in attracting crowds to the theatres in its first weekend as well as on weekdays.

Sharrath Marar of NorthStar Entertainment has acquired its theatrical rights for the Telugu states for a whopping price of Rs 4.50 crore. Adirindi and Mersal have not only recovered the distributors’ investments, but also made 25.55 percent of profit share to them in its opening week. It has become a hit film in just 8 days.