Tumhari Sulu is a comedy-drama film, directed by Suresh Triveni and produced under the banners of T-Series and Ellipsis Entertainment.

Sulochana Dubey nicknamed Sulu is a house-wife who enjoys her life to the fullest with her husband & 11 year old son. She dreams of being a working women, but since she couldn’t complete her high school she cannot think of any blue collar jobs. Her 2 elder twin sisters are always critical of her educational credentials & mock her failed business ideas.

Vidya Balan (Sulochana a.k.a. Sulu) essays the role of a night radio jockey in Mumbai. 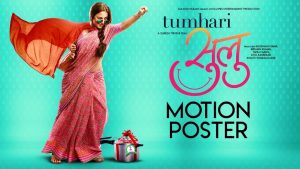